In Hong Kong, a transsexual who plans to marry her boyfriend in church after winning a legal battle on Monday said yesterday her victory was an answer from God that she "did not choose a wrong path". The former man identified only as "W" was speaking as the government sought legal advice on the implications of the Court of Final Appeal ruling that a "post-operative male-to-female transsexual person" must be included within the meaning of "woman" and "female" in marriage law.

Speaking on radio yesterday, W said she had asked herself all along whether the path she had chosen "was not permitted by God". But in Monday's ruling, "God gave me the answer, and the answer is: it is not a wrong path".

She said she was planning to hold her wedding in a "dreamy church" and places where she would look pretty in her bridal gown for photos.

Gay couples will be permitted to wed in Minnesota starting in August, making it the 12th state to permit same-sex marriage and the first in the Midwest to take such a step outside of a court ruling.

“In my heart of hearts, I know that today love wins,” State Senator Tony Lourey, a Democrat, said Monday during a tense, often personal debate before the vote. 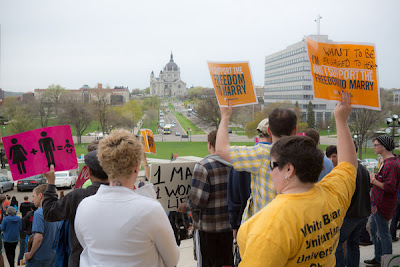 A Church of England congregation in Burnley, Lancashire, in the North West of England, has pledged to work towards an inclusive mission to welcome all worshipers regardless of sexual orientation.

Rev Graham Sawyer, at St James Briercliffe Church, told the Lancashire Telegraph: ”For me, and I believe many others here, the definition of tolerance is prejudice with a smile. We at St James Briercliffe seek to be a congregation that accepts all people regardless and to walk alongside all. At a time when the national Church seems to be sending out confusing signals both to women and also to gay, lesbian, bisexual and transgender people, we hope we can send out an unqualified message of acceptance and welcome at St James.”