Worcester, Rhode Island, (Roman Catholic) Bishop Robert McManus admitted in traffic court to refusing to submit to a chemical test during an altercation with police last week. His DUI refusal will result in the minimum sanctions for first-offense refusal. His driver's license will be suspended for at least six months, and he will be required to complete 10 hours of community service and attend DUI education classes. He also received fines totaling $945.

Narragansett police dismissed charges of drunk driving and fleeing the scene of an accident in exchange for the bishop's admission of the chemical test refusal.

McManus has already publicly apologized for his actions.

We all make mistakes and I wouldn't call for the resignation of a bishop because he or she drove whilst over the limit. Even the fleeing the scene of an accident is forgivable if owned up to later. The reason why I think his Church should seriously consider removing Bishop McManus from his episcopal position is that he refused to admit his crime and, instead, did a deal with the authorities. Okay, he has not, literally, got away with murder because nobody was killed in the accident. But that was down to luck and nothing else. Drink driving is an indiscriminate killer. A man who would excommunicate politicians who vote for legalising contraception on the basis that birth control degrades the sanctity of life should not engage in an illegal activity that so often leads to injury and death.

Bishops should be examples of righteous living. This does not mean that they should be perfect, because only God is perfect. However, it must mean that they admit to their wrongdoings and  accept the consequences. If Bishop McManus was driving drunk and did have an accident from which he ran (drove) away then he is now in the position of being unforgiven by God according to the theology of his own denomination. In the future, when he offers people the sacrament of reconciliation he will be acting with gross hypocrisy which will further undermine his authority as the shepherd of his flock.

McManus should fess up and take the rap for all the crimes he committed that night. Any other course of action on his part would show him to be a man lacking integrity and honesty and completely unqualified and bogus when it comes to telling other people how to behave. 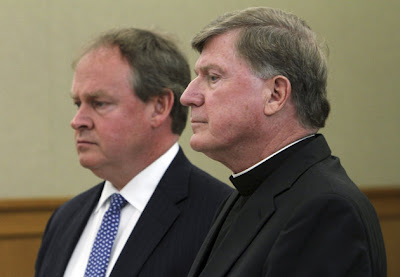