I see the Scouts in the USA have gone for the Rowan Williams solution. Gay boys can become scouts but when they grow up into gay men they will not be allowed to become scout leaders. Yep, that's the same nonsense the Church of England is trying to impose on its membership. And I'm sorry, Boy Scouts of America, it ain't working for us and it won't work for you either. 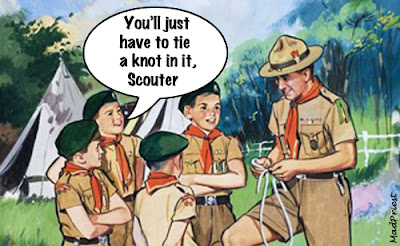 It strikes me that if you are going to have a load of gay boy scouts clearing off into the wilderness to camp (it up) together then it would be a jolly good idea to have a few gay scout leaders around to tell them to be careful. I mean the lads are not going to listen to boring straight grown ups but they might have some respect for a gay adult who has been through what they are going through.