The British media is still trying to make Margaret Thatcher out as being something more appealing than the most evil woman who ever walked the earth (including that Transylvanian woman who bathed in the blood of maidens). Here is a photograph, taken in 1999, of the woman visiting her good friend, the mass murderer and fascist dictator, General Pinochet, whilst he was on the run from the police forces of various countries including his own. This was not diplomacy as neither of them were still in office. It's just that she was a life long supporter of fascism and apartheid and she never gave a toss about the odd few thousand disappeared young men whose mothers weep for them everyday. 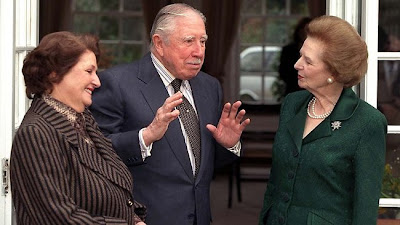