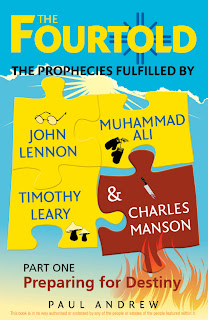 Could four of the most famous people of the twentieth century have possessed hidden identities and fulfilled ancient prophecies? The answer, according to author Paul Andrew, is an unequivocal yes.

In his new book The Fourtold – The Prophecies Fulfilled by John Lennon, Muhammad Ali, Timothy Leary and Charles Manson, Andrew tells the story of how four of the most famous people who ever lived changed the world forever. As he explains in the book’s preface, all the events he writes about actually happened and all the prophecies are real. The Fourtold simply puts the clues together to form a story that has never before been told.

This “imagining,” as Andrew calls it, takes readers on a remarkable journey through the twentieth century, contending that John Lennon is the long-awaited Messiah, Muhammad Ali is the Mahdi, Timothy Leary is the Messenger, and Charles Manson is the Antichrist.

The story begins in Germany, where a ruthless dictator named Adolf Hitler comes to power. As he takes over Europe, millions of people pray for salvation. Andrew explains, “Almost as one voice, they pray for the Messiah to come. In 1940, with the birth of John Lennon, their prayers are answered.”
The Fourtold reveals how, over the next twenty years, Lennon prepares for his mission by working toward obtaining the fame he will need more than anything else in order to spread his message of love and peace. At the very peak of his success, he meets a man who will help him with his quest, a boxer named Cassius Clay.

Clay has also been working to gain fame so that he can spread his own message – the message of equal rights. Days after their meeting, Clay changes his name to Muhammad Ali and begins to tell the world about his beliefs.

Both separately and together, these two powerful people work toward their goals, aided by a Harvard professor named Timothy Leary whose secret weapon has the power to spread the message of peace more rapidly and effectively than anything ever discovered before. In fact, says Andrew, Leary’s mind-altering drug has the ability to transform overwhelming hatred into unconditional love.

Nonetheless, one individual who uses this drug has far less altruistic intentions. As The Fourtold details Charles Manson’s activities and increasingly bizarre demands on his followers, it demonstrates that Manson’s actions, like those of the other men, fulfill numerous prophecies.

Andrew comments, “I’m not saying my conclusions are necessarily true, but just imagine if they were. From World War II to the Vietnam War and the Civil Rights Movement, this story will take you on a journey through the twentieth century in a way you have never experienced before.”

Interspersed with hundreds of prophecies from Nostradamus, the Bible, and elsewhere, The Fourtold is available in two parts that total more than 850 pages.

AUTHOR: Paul Andrew has a background in research and has contributed to several books and magazines. He has spent five years researching and five years writing The Fourtold.