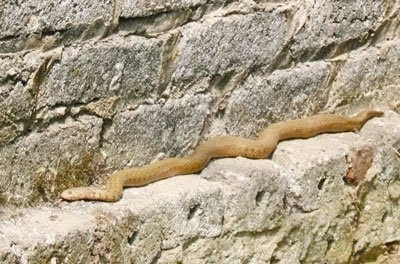 Since the lunar New Year, thousands of people have flocked to Tan Son village in Tan Dinh Commune, Lang Giang District, Bac Giang Province to see and worship a snake because they believe that it is the God of Snake. The snake appeared behind the old Temple of Tan Ninh, which was classified as a relic. Local people put up a tent and made an altar to worship the snake. The snake’s hole is under a ruined wall, surrounded by five dead trees with a diameter of about 40cm each.

Reporters were at the site in the morning of March 11.  At about 10.30 am, it was sunny and someone shouted happily: “The sacred snake is coming”. From a small hole under the wall, a brown snake of around 80cm long crept out. Many people took photos with their cell phones and cameras. The snake just quietly crawled out and lied on the wall.

An old man said: “The God of Snake is very sacred. Some people who came here to see him but didn’t believe in his sacredness and spoke ill of him had nightmare. They had to come back here to make their excuses to the snake to have good sleep.”