From THE CHRISTIAN SCIENCE MONITOR: 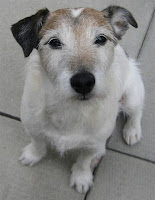 “If there’s food, he’s got to get it. He climbed on my desk to get at the bag with the bagel and knocked the change all over the floor. While he was licking up the crumbs, he swallowed the pennies,” said Tim Kelleher, the dog's owner who rushed him to a Manhattan veterinarian for emergency surgery.

After removing the pennies five at a time, Mr. Kelleher said he let Dr. Zalcman keep the change and Jack is now back to his normal self, still driving his owner crazy.