↓
Home Menu ↓
Skip to primary content
Skip to secondary content
The doctrine of “equal marriage” is a slogan created by post-Christian, socialist revolutionaries as a political tool to create a totally new cultural paradigm of morality that can only be implemented after the “complete destruction of the family unit,” Bishop Jean Laffitte, Secretary of the Pontifical Council for the Family told an audience at the Student Union Hall of St. Mary’s University College in Twickenham last week.
He warned of a massive, international effort to rewrite social norms in the formerly Christian countries of the West that has resulted in the “extremely rapid extension” of laws “that endanger the very survival of the family.” He affirmed what many in the pro-family movment have long believed, that the push for “gay marriage” is not coming exclusively from homosexual lobbyists, but from a more sinister international cadre of highly placed secularist social engineers seeking a radical alteration of the foundational ideas of Western Civilization.
Meanwhile, in England:
Labour peer Lord Ahmed has been suspended by the party after apparently claiming a Jewish conspiracy was responsible for his imprisonment for causing a fatal car crash. He allegedly made the comments in an television interview in Pakistan in April last year. It is claimed that in the interview, conducted in Urdu, Lord Ahmed said Mr Justice Wilkie was appointed to sentence him at Sheffield Crown Court in 2009 in order to help a "Jewish colleague" of Tony Blair. The peer suggested the supposed Jewish plot had followed his support for Palestinians in Gaza. 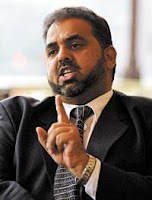 What a load of twaddle. I'm all for a good conspiracy theory but the bloke killed somebody because he was busy texting instead of concentrating on the road and got away with a twelve week prison sentence.  I think it is far more likely that the old boy network swung into action to get his lordship a ridiculously light sentence. I would have sent him away for life as being on the phone whilst driving is a criminal offence in England, and quite rightly so.

Full story at THE JEWISH CHRONICLE.