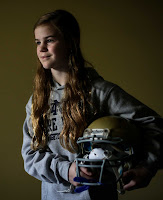 An 11-year-old girl near Philadelphia won her crusade to play football for a Catholic Youth Organization team, after the city's archbishop reversed a boys-only rule. Caroline Pla has played organized football since kindergarten, but was told last fall the no-girls rule would be enforced in her Bucks County league. She petitioned the archdiocese, leading to Thursday's decision from Archbishop Charles J. Chaput.

Chaput called the decision "provisional," and said it may be reviewed or revised over time. Several other dioceses already allow girls to play.

"I didn't even really think the rule was going to be changed because of all the things that they said," said Caroline, who turns 12 on Wednesday. "Today is like double (excitement) for Catholics because now girls can play football and there's a new pope."

Aah, the naive innocence of youth.

But, hurrah, hang out the flags! We've been following this story and rooting for young Caroline, since it first hit the internet. I think Caroline's mum may be being a bit optimistic but you never know - today girls playing football, tomorrow Pope Joan II?