The Ides of March has taken on new meaning in the Santa Rosa, Calif., diocese, where teachers and administrators have until March 15 to sign a letter of intent to renew their contracts for the 2013-2014 school year. The contracts now include an addendum requiring they agree they are "a ministerial agent of the bishop" and that they reject "modern errors" that "gravely offend human dignity," including "but not limited to" contraception, abortion, same-sex marriage and euthanasia.
The roughly 400-word addendum requires all teachers and administrators -- Catholic and non-Catholic -- to "agree that it is my duty, to the best of my ability, to believe, teach/administer and live in accord with what the Catholic Church holds and professes."
About 25 percent of the 200 teachers in 11 schools under diocesan administration are not Catholic. Those schools enroll about 3,100 students.
Will they be rewriting the "Pledge Of Allegiance" for the kids to recite. Something along the lines of "I pledge allegiance to the Vatican State in America..." 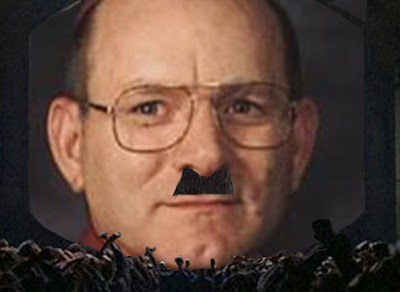 Thanks to Whiteycat for alerting me
to this latest example of cathofacism.