But for the signpost with the inscription, “Multicare Hospital and Women Welfare Centre”, placed in front of the uncompleted two-storey building at the Omagba phase one area of Onitsha, nothing suggests that the occupant is involved in health matters. From the entrance to the building through the staircase, one is confronted with a blinding smell of drugs and medical wastes. Inside the rooms, the patients sweated profusely on top of creaky beds with torn mattresses. For lack of space, some of them lay on the stretcher, taking infusion by the staircase. Others writhing in pains from various degrees of injuries, spat intermittently to ward off the stench that pervaded the place. Before his visit to the hospital, Codewit reporter had earlier, from the adjoining street, spotted some persons peeping out from iron rod protectors on the second floor of the building. It was later gathered that they were patients detained by the owner of the hospital due to their inability to pay their medical bills. Sources stated that some of them have stayed in ‘captivity’ for nearly two years as they seek for ways of settling their bills and regain their freedom. While in the illegal detention, they survive on pittances thrown up to them by passersby and few others who muster courage to climb up the stairs to offer them something. To ensure that they do not escape, the Doctor fixed the iron rods on the windows and chained up the apartment with heavy padlocks. Only the nurses in the hospital are allowed to open the padlocks periodically when they want to pick up any medical devices on that floor.

Now, remind me again, what exactly is so bad about universal, free healthcare? 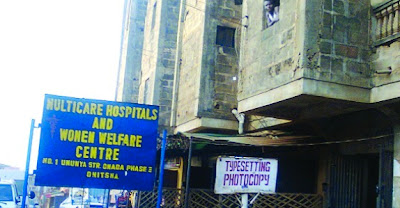