For thirty years at a Virginia Beach church, Roman Catholic and Episcopal clergy have performed services together and shared leadership duties. Clergy move to opposite ends of the sanctuary during the Eucharistic portion of the service and perform the Holy Communion rite at separate altars. They use similar but separate Catholic and Episcopal liturgies.

But now, Vatican enforcer, Bishop Francis X. DiLorenzo, has told the Church of the Holy Apostles congregation to bring its liturgical celebrations into conformity with the Roman Catholic Church (in other words, stop worshiping God in the same room at the same time as each other) and to do so by February 28th. this year.

Fair enough, we all know what the Vatican church thinks about the rest of us. Any Anglicans who decides to cuddle up with Rome without signing over their soul to the Ordinariate, only have themselves to blame if they get kicked in the goolies. Mind you, DiLorenzo's postscript to his commandment from on high asks far to much of our credulity. He states, "As the shepherd of the Diocese of Richmond, it is my prayerful desire that this ecumenical community at Holy Apostles continues and flourishes."

Pull the other one, Bishop. It has bells on. Full story at CT POST. 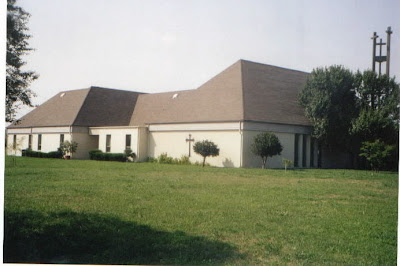 This is the original mission statement of the Church of the Holy Apostles, prepared in 1978. Thanks to Benedict XVI and his predecessor, ecumenism really has taken one, giant step backwards since then.

Remembering that we, as a unique community of Episcopalians and Roman Catholics, are entrusted with a vision of God's action in His people, we declare that we have been called to a new venture in the history of the Church. As the Church of the Holy Apostles, We are called to be a living sign of the Church's efforts toward organic unity, and to promote the ecumenical ventures among Christian bodies. We are called to share the gifts of ministry with one another, and to be channel's of God's love in the world involving ourselves with all others. As Apostles, We commit ourselves to build community by discovering our wants and needs and those of others through calling members to share their gifts freely and to grow; by nurturing members in faith and tradition; be celebrating renewed life together in worship and fellowship. We commit ourselves to spread the Good News of our life in Jesus Christ, who calls us into oneness.

Ah, well. It was good while it lasted.