A British man is being in held in a prison in Uganda after appearing in a play which exposed the plight of homosexuals in the country. Keith Prosser was arrested by Ugandan police and thrown into a cell following his appearance in the play The River and the Mountain, in which a group of Ugandan employees kills their own boss when they learn he is gay. He has been held in a Kampala detention centre for the past eight days.

Homosexuality is illegal in Uganda and the authorities had tried to block the play, which was staged in Kampala. David Cecil, another British citizen who produced the play, was also arrested. Mr Cecil was deported on Monday as an “undesirable immigrant” after spending five days in detention at a Kampala police station.

In the play, staged twice last year, Mr Prosser played an evangelical Pastor who “spreads the gospel of homophobia.” 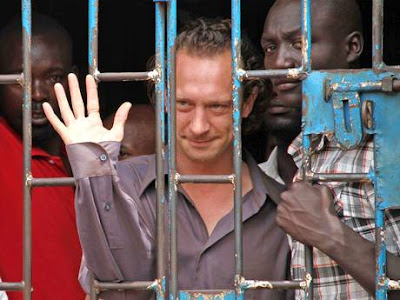 There was an evangelical, Ugandan priest on my degree course at Nottingham University (a man, of course). One day we were both attending an anthropology lecture and the lecturer started talking about the homosexual aspects in the rituals of a certain Ugandan tribe (or something like that). My Ugandan colleague leapt to his feet and started shouting at the lecturer that there weren't any homosexuals in Uganda.

This was twenty years ago. Obviously nothing has changed in the meantime.