Here it is then. The reason why Ratzinger resigned. To be honest, unless all the cardinals take the opportunity of the conclave to choose his successor to also announce their own resignations I think that Roman Catholicism will be dead as far as the modern countries of the world are concerned. No doubt it will hang on, even prosper, in those parts of the world where the sexual hypocrisy of men is not only tolerated but expected, but any western catholic who still owns up to their membership of the institution of lies is going to need pretty thick skin and the ability not to get upset when people either laugh or spit at them.

A potentially explosive report has linked the resignation of Pope Benedict XVI to the discovery of a network of gay prelates in the Vatican, some of whom – the report said – were being blackmailed by outsiders. The pope's spokesman declined to confirm or deny the report, which was carried by the Italian daily newspaper La Repubblica.

The paper said the pope had taken the decision on 17 December that he was going to resign – the day he received a dossier compiled by three cardinals delegated to look into the so-called "Vatileaks" affair.

According to La Repubblica, the dossier comprising "two volumes of almost 300 pages – bound in red" had been consigned to a safe in the papal apartments and would be delivered to the pope's successor upon his election.

La Repubblica quoted a source "very close to those who wrote [the cardinal's report]" as saying: "Everything revolves around the non-observance of the sixth and seventh commandments." The seventh enjoins against theft. The sixth forbids adultery, but is linked in Catholic doctrine to the proscribing of homosexual acts. The newspaper said the cardinals' report identified a series of meeting places in and around Rome. They included a villa outside the Italian capital, a sauna in a Rome suburb, a beauty parlour in the centre, and a former university residence that was in use by a provincial Italian archbishop.

Now, to be honest, I'm not in the slightest bit interested in the sexual pursuits of other people as long as nobody gets hurt, not even if it involves the pope himself. The scandal here is the extreme level of hypocrisy involved. How many priests and theologians have been sacked during Benedict XVI's reign of terror for just suggesting that priests need not be celibate and that maybe being gay isn't the crime against nature and God that the men at the top insisted that it is. When you add these revelations to the child sex abuse scandal, the Magdalene Laundries scandal,all the cover ups and the blackmail of politicians throughout the world, I cannot see how any person of good conscience will be able to stay as a member of the Roman catholic church if there isn't an immediate cull of all those presently in positions of authority. Anything less than this would be a compromise with the devil.

I only hope that the shit that is about to hit the Roman Catholic fan scares the living daylights out of all the Church of England bishops who presently denounce gay relationships and gay clergy in public whilst shagging their male lovers behind the doors of their palaces. 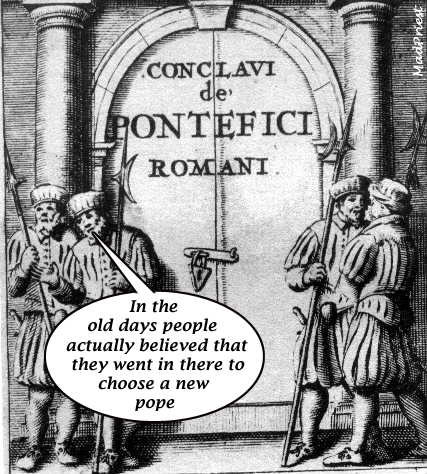