One of the problems of following a religion that is 2000 years old is that there are no photographs or YouTube clips of its founders. In Christianity's case there aren't even any paintings of Jesus around, so people are left with no alternative other than having to imagine what he looked like. Most of the faithful over the years, at least those in the Western Church, have agreed that Christ was a tall, white, Northern European adonis with a beard and long, flowing hair (rather similar to Robert Plant when Led Zeppelin were at the height of their fame). However, this view of Christ is not universal. For example, in the town of Billericay in Essex, England, the local Christians have traditionally held that Jesus Christ looked like Jon Pertwee's seminal portrayal of Worzel Gummidge in the ITV series of the same name that ran between 1979 and 1981. Usually this eccentric understanding of Our Lord's visage is a harmless idiosyncrasy but occasionally it does cause problems, especially for local farmers and others involved in the rural economy of the region, as the following report from THIS IS TOTAL ESSEX illustrates very clearly.

A giant scarecrow mounted on a 20 foot cross has been agitating more than just birds in Billericay. The gigantic stuffed figure, complete with a miniature counterpart, has been erected in a Jesus-like pose at the junction of Barleylands Road and Southend Road – and many of the area's Christians are not happy. 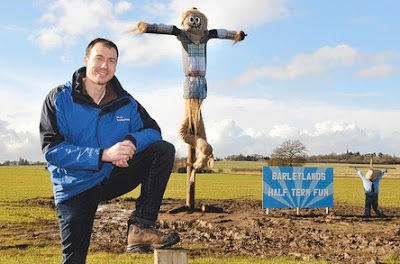 ​One mother from Billericay, who refused to give her name, said: "I think it's incredibly distasteful and it is making fun of Jesus. I drove past the scarecrow with my daughter and she said, 'Look, Mummy, there's a man on a cross.' It's an unmistakable crucifix and it's making a mockery out of my religion."

David Finkle, general manager at Barleylands Farm Park and Craft Village, who helped to make the scarecrow and its smaller equivalent, claims they are to promote the farm's half-term activities for children. But this is obviously a lie and, in reality, he is the Antichrist come to earth to lead an army of demons against the Christians of Essex in the ongoing "war against religion." Which, at least, let's Barack Obama off the hook.