Kevin Frayer, a photographer with The Associated Press, took a series of photos of Hindu holy men before and after they had their beards and hair shaved off as part of the initiation ritual to become Naga Sadhus. Check out NBC's PHOTOBLOG for some excellent portrait photography. Although maybe a bit scary - I wouldn't want to meet Baba Sanjay down a dark alley late at night. I'm sure he's a lovely man and all that - but those eyes... 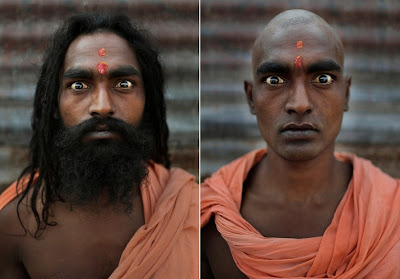 From PRI's THE WORLD:

In L’Hospitalet, near Barcelona, a priest let a bunch of graffiti artists go to town on his church. Specifically, on the dome ceiling above the main altar. The Santa Eulalia church is neo-Romanesque in design, with a Catalan twist. Inside it’s austere. The walls are painted nondescript colors, the statues of Jesus, the Virgin Mary and the Saints are simple. To compensate Father Ramon Borr decided to make the main dome a little different. In the ante-chamber of the church on a recent evening, he recalled how he came upon the idea last year, surfing the web. He said to himself, why not graffiti?

“Even though the press is scandalized by graffiti artists,” he said, “for me graffiti is just another artistic technique.”

The result is a spectacular splash of colors – rich blues, bright reds and greens, on the rounded ceiling dominating the main sanctuary. But don’t think street art. In fact, the style of the painting is faithfully Romanesque, with static, two-dimensional renderings of Saint Eulalia, the Virgin and Baby Jesus and the congregation. Borr says he sent his two young graffiti artists to school before he let them near the place.

“I told them they couldn’t start until they visited a museum in Barcelona to study the Romanesque style I was interested in,” he said. “So they went, and studied, even took out some books.”

Only after that could the project come together. I must say, I really like it. But it's quite different to the graffiti art you get on the bus shelters round my way.

A belated happy birthday to The Angel Of The North who was 15 years old on 14th. February.

Anthony Gormley’s website states that he “wanted to make an object that would be a focus of hope at a painful time of transition for people of the north-east, abandoned in the gap between the industrial and the information ages”.

To say the least this momentous sculpture has done just this, as it has had millions visitors as well as the 90,000 drivers that pass it each day. Standing 20 metres tall and spanning 54 metres across, it is hard to miss. A key aspect Gormley wanted to emphasis was the past strong industrial state of the North East. Below the Angel lay the coals mines that had been worked in for two centuries before hand. It is these connections that have made the Angel of North part of the North East’s culture and heritage. (NEWCASTLE FREE PRESS)

It's just a shame about the graffiti. 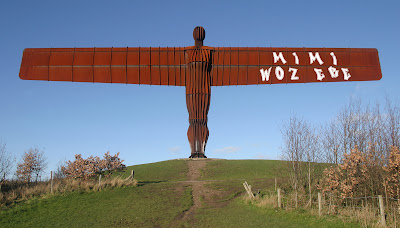 Check out more great photos, this time of Trappist monks, on the GUARDIAN website. They are from an exhibition on at Holy Trinity, Sloane Street, until 9th. March. 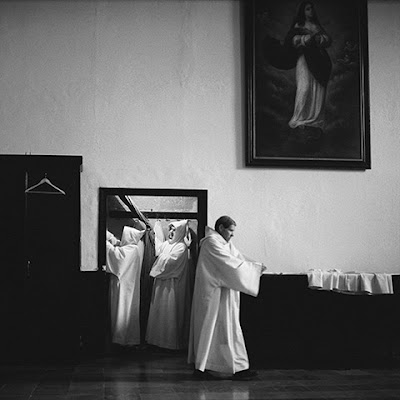 On Monday, international architect schmidt hammer lassen announced the inauguration of the Cathedral of the Northern Lights in Alta, Norway, some 500 km (311 miles) inside the Arctic Circle. The metallic spiral form of the building is clad in titanium. Check out GIZMAG for more excellent photos, including some of the interior that should appeal to a good few of OCICBW...'s TEC readers amongst others. 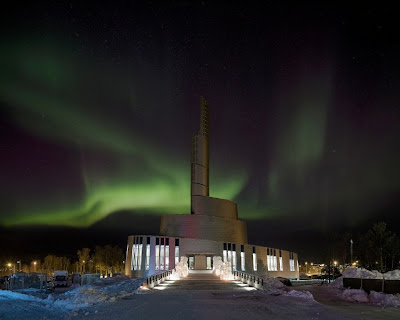