Posted by THE FRIENDLY ATHEIST:

Earlier this week, the Archdiocese of Cincinnati fired Mike Moroski, an assistant principal at Purcell Marian High School, for showing “poor judgment” and violating the teachings of the Roman Catholic Church.

"Furthermore — I unabashedly believe that gay people SHOULD be allowed to marry. Ethically, morally and legally I believe this. I spend a lot of my life trying to live as a Christian example of love for others, and my formation at Catholic grade school, high school, 3 Catholic Universities and employment at 2 Catholic high schools has informed my conscience to believe that gay marriage is NOT something of which to be afraid. To me, it seems our time would be much better spent worrying about the economy, our city’s failing pensions, retaining our big business neighbors and finding creative, efficient, effective ways to fund our excellent Cincinnati Public Schools."

For having the courage of Christ before Pilate and not being intimidated by the Roman Authorities, Mike Moroski is our:

Not that it will pay his bills. And he could be thrown out of his house onto the streets and allowed to starve to death as far as the powerful men of Roman Catholic Church are concerned. Fortunately, those who Jesus loves a lot more than the pharisees of his church, are prepared to at least try and help their teacher. Moroski’s students have held demonstrations at the Archdiocese’s downtown office asking them to bring him back to school. 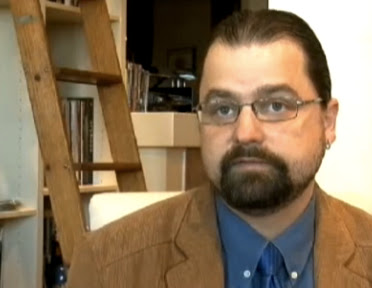