I was watching a documentary about penguins the other day. They really are amazing creatures. They persevere against incredible odds each year to raise their young in some of the most inhospitable places on earth. They are loving and loyal to their mates and their young. They do group hugs to keep each other warm and join together to risk their lives seeing off predators. All in all, they are everything that human beings say they want to be but are not. I thought, wouldn't it be lovely, when the human race inevitably wipes itself out, if the penguins became the new dominant species on earth rather than the rats (who are far too similar to humans to make any difference for the better).

Spanish politicians have thrown the (so-called) sport of bullfighting a lifeline by voting in favour of plans to declare it part of Spain's cultural heritage.

The vote the came after 590,000 enthusiasts signed a petition calling for a change to bullfighting's legal status. The vote in favour of bullfighting will eventually allow fight organisers to apply for tax breaks and could reverse the bans already in place in Catalonia and the Canary Islands. 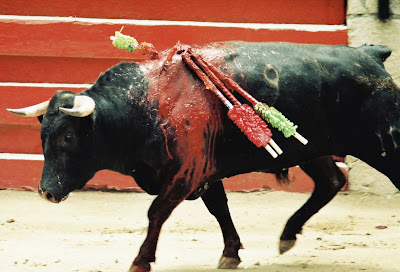 Then there is this...

No wonder God is throwing bloody great bits of space rock at us.