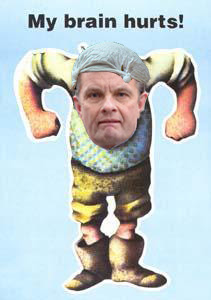 Is Welsh secretary, David Jones, attempting to lead some kind of double political life from within the Conservative party? After a TV interview and a clarifying statement, he still doesn't seem quite sure what he's talking about. Jones says that his reason for voting against gay marriage was that "clearly" gay couples "cannot provide a warm and safe environment" in which to raise children. His clarification: "Since same-sex partners could not biologically procreate children, the institution of marriage, in my opinion, should be reserved to opposite-sex partners." However, Jones says that he is not against civil partnerships, or gay couples adopting, and he has "people in my life who are important to me who are gay". What kind of skewed mindset thinks gay couples should have civil partnerships and adoption rights, then balks at marriage?

... this is exactly the same claptrap that the Welsh druid, Rowan Williams came out with and which now most of the Church of England's talking heads spew out whenever someone in the media implies that maybe they're being a little homophobic.

Quite honestly, if that isn't blindingly obvious to you then you must be a Welshman, boyo.