When it comes to Armageddon it's just one scare after another. First that crazy, old preacher man, Harold Camping told us (twice, in fact) that we were all going to die. Then the Mayans got us all scared with promises of mass extinction. And only this week those devious scientists at NASA promised us that a bloody great big bit of space rock would miss earth by 17000 miles whilst completely failing to mention that another bloody great big bit of space rock would hit earth the day before injuring over a thousand people and knocking whole buildings down. You are probably feeling quite relieved that somehow we have managed to survive all these predictions of doom and incorrect predictions of non-doom. Well, stop it now! We are still all going to hell in a handcart. Gog and Magog will meet in the bout to end all bouts. Move over dinosaurs here come the humans!

And it's all the fault of the pope.

Or, to be exact, the next pope.

Is the world only a Pope away from the End? Yes, if you believe a chilling 12th-century prophecy. Attributed to St. Malachy, an Irish archbishop canonized in 1190, the Prophecy of the Popes would date to 1139. The document predicted that there would be only 112 more popes before the Last Judgment — and Benedict XVI is 111.

The list of popes originated from a vision Malachy said he received from God when he was in Rome, reporting on his diocese to Pope Innocent II.

The 109th pope is described as “of the half of the moon. John Paul I, elected pope in 1978, lasted about a month, from half a moon to the next half. His successor, the late Pope John Paul II, Malachy described him in Latin as “de labore solis,” meaning “of the eclipse of the sun, or from the labor of the sun. John Paul II (1978-2005) was born on May 18, 1920 during a solar eclipse. His Funeral occurred on April 8, 2005 when there was a solar eclipse visible in the Americas. “Glory of the Olives” is the motto for Benedict XVI, the 111th pope in the list. A branch of the monastic order founded by St. Benedict is called the Olivetans.

According to church tradition, no pope can take the name Peter II. However, one of the favorites to succeed Benedict XVI is Ghanaian Cardinal Turkson. His first name is Peter. 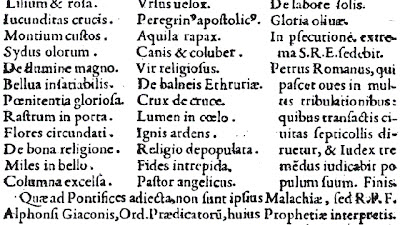