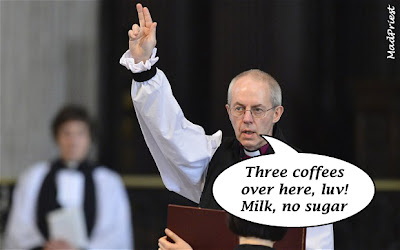 Eight senior female clergy are to be elected to join the House of Bishops as “participant observers” until there are women bishops to take their place. Although not formally styled as bishops they will play a full part in deliberations and the House's standing committee. The new status was agreed at a special meeting at Lambeth Palace, the first gathering of the bishops since the new Archbishop of Canterbury, the Most Rev Justin Welby, took up his post.

It's just the same old, old boys' club but with a few women, already favoured by the old boys, being allowed to watch. The whole system stinks. Instead of the eventual election of women to the episcopacy being a breath of fresh air in the Church it's going to just be more stuffy careerists appointed by stuffy careerists who have already got to the top. The only difference is that some of the stuffy careerists will be wearing skirts (in public).