Twitter newcomer Pope Benedict XVI has complained that popular social media users and smooth talkers are creating a din and stealing attention from those trying to address key social and faith issues.

"The culture of social networks... pose demanding challenges to those who want to speak about truth and values," Benedict said in a speech to mark World Social Media day, in which he complained of the "din of excessive information" online.

"Popularity is often linked to celebrity or to strategies of persuasion rather than to the logic of argumentation," said Benedict, who already has over a million followers on Twitter.

Ain't that just typical of the old boy. He's only been on the internet a few weeks and already he's telling everybody else what to do. But he's right about one thing - you can write utter drivel, even write it in Latin, and if you're famous people will still read it. 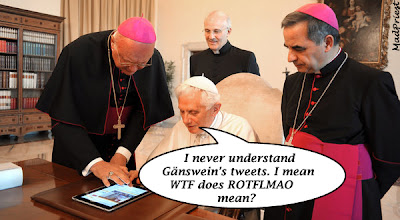