I don't think, in all the years I've been blogging on the sillinesses and nastinesses of organised religion, that I've ever come across a story as silly and nasty as this. Honestly, every Christian evangelist and missionary in the world should pack up their bags and go home to watch TV for the rest of their lives. I mean, what's the point of bigging up God as our loving creator when men like Matthew Harrison come out with evil nonsense like this that presents God to the world as a mean spirited, bureaucratic psychopath?

A Connecticut Lutheran pastor has apologized for participating in an interfaith prayer vigil for the 26 children and adults killed at a Newtown elementary school in December because his church bars its clergy from worshiping with other faiths. The December prayer vigil was attended by President Barack Obama, leaders from Christian, Muslim and Jewish faiths, and relatives of the 20 first graders who were gunned down in their classrooms two days earlier after a gunman entered their school. The pastor, Rob Morris of Newtown's Christ the King Lutheran Church, provided the closing benediction at the interfaith event.

Earlier this month, the president of the Lutheran Church—Missouri Synod, Pastor Matthew Harrison, wrote a letter to church members saying he had requested an apology from Morris for his participation in "joint worship with other religions."

"There is sometimes a real tension between wanting to bear witness to Christ and at the same time avoiding situations which may give the impression that our differences with respect to who God is, who Jesus is, how he deals with us, and how we get to heaven, really don't matter in the end," Harrison wrote. 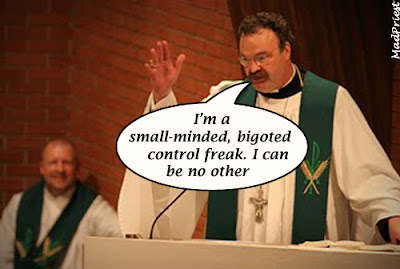