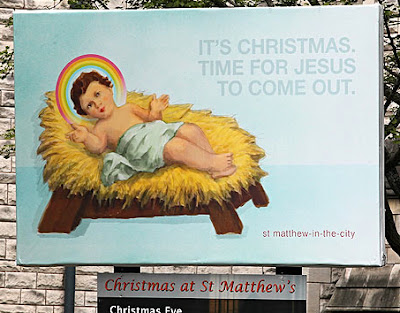 A complaint about an Auckland church billboard questioning whether Jesus was gay has been dismissed on the grounds it wasn't offensive. The complaint to the Advertising Standards Authority said the representation of Jesus was "akin to hate speech."

The billboard was "prepared by a Christian church to promote debate within the Christian faith, as opposed to a deliberately offensive advertisement by an outside party for commercial gain, had been prepared with a due sense of social responsibility", the decision reads.

It's the makers of the complaint who should be punished for hate speech. They are trying to make out that saying Jesus might have been gay is hate speech. In other words they are saying being gay is an evil thing. Calling something evil that is not evil is a hateful thing to say. There is overwhelming consensus in Western Christianity that being gay is not intrinsically sinful so it can't be evil. The billboard outside St. Matthew-in-the-City made no comment about Christ's sexual activity. Therefore, the bringers of the complaint were being hateful towards gay people including celibate gay people.