I am a socialist. I despise the Conservative Party's economic policy, especially its failure to make the rich contribute fairly to society and their insistance on giving that which belongs to all of us to a few of their friends to make money out of. To put it bluntly, they are my enemy.

However, sometimes you have to accept that an enemy is, in fact, a far better person than you make him out to be. This will never happen in respect of Margaret Thatcher, of course, because the woman had absolutely no redeeming features. But David Cameron is not Mrs Thatcher, far from it. Unlike Thatcher, he is obviously human as his family life demonstrates. But, more than that, he is a man of integrity and that cannot be disputed even if we believe much of his integrity to be misplaced. In the past he has apologised when an apology was needed and without reservation and I have been greatly impressed by this. Although I think he is going about it completely the wrong way I cannot but say that he is after consensus and peace in our land and does not employ the divide and conquer techniques that so many of his predecessors, both Conservative and Labour, have cynically used to get their own way. Most of all, as his championing of the Marriage Bill today demonstrates, he is prepared to fight some pretty ferocious dragons if he really believes in something.

Yes, he's a politician. Yes, he's a privileged hooray who got where he is today as much because of family connections and influence as any talent of his own. No, I will not be voting for his party no matter how many injustices he consigns to the bin of shame passed. However, tonight I raise my glass to him, which is not for the first time, and thank him for doing something really wonderful for so many people who have waited so long for a prime minister like him to come along. I am proud of my prime minister today and proud to be living in a country where love, at least sometimes, is placed above the politically pragmatic.

Now, does anyone want to buy a used national church? It doesn't work properly and, in fact, causes more damage than it does good. It's a very old model that hasn't been upgraded for centuries. But it might have some scrap value to those interested in antiques or historical reenactments. It thinks it's worth far more than it actually is. You can have it for a tenner. Buyer must collect. 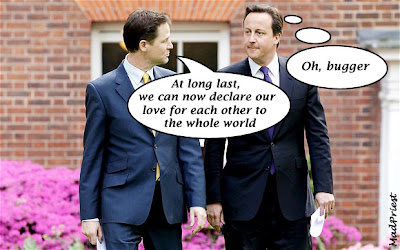