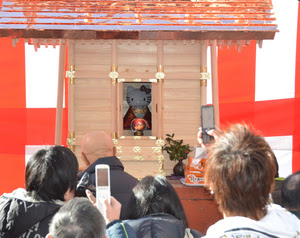 A shopping district in Kofu City removed the stone Hello Kitty statue from its "Kitty-chan Shrine" on Tuesday, just two days after it was installed. It installed the statue at the "Kofu Ginza Street" entrance in the city's Chūō ward to bring in more young customers, since Kofu is the birthplace of Sanrio's president Shintarō Tsuji. It also built a shrine out of cypress for the statue, and about 100 people attended the unveiling ceremony on Sunday. However, Sanrio learned about the statue from media reports of the unveiling and lodged a protest and a request for its removal.

Yet another attack on religious freedom.
I wouldn't be surprised that if you built a shrine to the Flying Spaghetti Monster, Heinz would sue you.