I am sure the trendy bishop of Chelmsford, Stephen Cottrell, will have a carefully crafted, if somewhat clichéd, explanation as to why he can both love and respect all the gay clergy in the Church of England who, via Affirming Catholicism, got him his high earning job in the first place, whilst kicking them in the goolies (technically known as "doing a Rowan on somebody"), but in my book he is a betrayer plain and simple.

In cahoots with the Vatican's ambassador to Brentwood he has written the following letter to MPs protesting over the forthcoming Marriage (Same Sex Couples) Bill due to have its Second Reading on Tuesday.

We are taking this step of writing jointly so as to show our concern over certain serious implications of the Marriage (Same Sex Couples) Bill.

It is axiomatic that every government of a nation has the right to legislate on how marriage is celebrated in that particular country and for its legal consequences there. However, we firmly believe that no government anywhere has the right to re-define or change the essential nature of marriage itself. This is because marriage both comes from God, as revealed through the Scriptures, and is equally a fundamental part of universal natural law.

In practical terms, although we are obviously aware that safeguards have been offered to grant exemption for religious bodies from some parts of the proposed legislation, it is to be wondered if such exemption would survive scrutiny by the Courts (whether national or international) as well of course, of always being subject to change by parliament itself in the future. We would also ask whether sufficient thought has been given to the inter-meshing between these current marriage proposals and the existing legislation which deals with equality and discrimination. This combination of legislation might well nullify the promised safeguards.

Taking these factors together, there must be genuine doubt as to whether there can inevitably be freedom of conscience and freedom of teaching in the future for all those who – of any religious creed or none – wish to express that truth about marriage which is rooted in Creation itself and is part of our human heritage.

May we also remark that it is of the utmost regret (and of great public comment) that a change to the Law of this magnitude is being undertaken in great haste and without any electoral mandate.

In conclusion we trust you will understand our concern in this matter is not only for the principles we have expressed but just as much for the people involved. Both of our Churches already have – in their own ministries – a deeply-rooted and heart-felt commitment to provide the best possible pastoral care for gay and lesbian people and for their families. You will appreciate that we take very seriously our on-going responsibility to discern and meet their spiritual and individual needs for the future. Though our two churches have responded to civil partnerships in slightly different ways, we believe this is a better and more appropriate way for government to provide for the legitimate needs of same sex couples.

In the light of the reasons outlined above we would urge you to vote against this Bill on its Second Reading next Tuesday.

Ironically, Stephen Cottrell was the sop thrown to truly inclusive Anglicans when Rowan Williams personally scuppered Jeffrey John's appointment as Bishop of Reading, as it was Cottrell who got the job instead. Due to his involvement in this reactionary diatribe I am reducing his odds of becoming the next Bishop of Durham to 3-1. 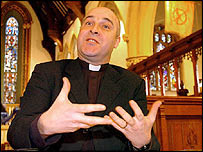