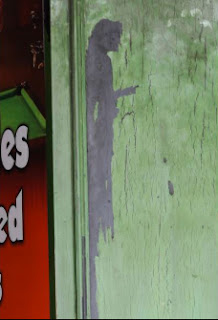 An image of the Messiah — or a rough approximation thereof — first appeared amid the chipped paintwork of Seanchai, Warrnambool’s Irish pub, in November 2010. It was quickly protected by perspex and drew a small number of curious onlookers. But the second coming of the Lord and Saviour is over, with a new paint job set to wipe Jesus’ silhouette off the Seanchai’s outside wall. The new owners considered keeping Christ’s likeness, but ultimately decided to paint over it in order to give the pub a new lease of life.

I think they'll find that it's the Ghost of Christmas Yet To Come and not Jesus. I think they'll also find that it's an Australian pub not an Irish one. Ireland is next door to Wales in the Northern hemisphere. Warrnambool is in Victoria, Australia. But I can understand why they would make such a mistake. Irish beer and Australian beer are both equally as bad.