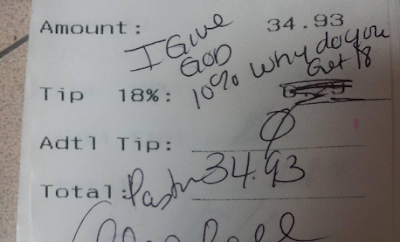 This photo shows a receipt for $34.93 with an automatic gratuity of 18% ($6.29) included. But the diner has scratched out that tip, writing instead that “I Give God 10% Why do you Get 18″ and adding the word “pastor” above his signature. And instead of leaving a tip just wrote a big “0.” In the comments on the post, the person who submitted the image explains that this was just a portion of the total bill for a table of 20, which means the 18% tip is automatically put on the bill.

We understand why someone might be upset about an automatic gratuity. But we can’t recall any religious texts that claim the best way to combat an unpleasant situation is to leave a passive-aggressive note while simultaneously penalizing someone who did not create the problem.

In England we have a law that states that slavery is illegal. This means that waiters, bar persons, taxi drivers, every worker in fact, has to be paid, at least the minimum wage, £6.19 per hour, by their employers. This means that tips in my country can be discretionary although we too have some grasping restaurants who automatically add a service charge to bills (I don't go to them because I doubt the tips go to the waiting staff anyway). I like tipping for good service on the rare occasions that I eat out. But I like the tip to go to the waiting staff (who will no doubt be paid minimum wages) and I dislike the practice of splitting all tips up between all the workers, including the ones on better salaries. I always discreetly go up to the member of staff afterwards and put the money in his or her hand. I also tip delivery drivers who have carried something heavy to my door. But that's probably because I used to do that job myself and would have loved to have been tipped far more than I ever was.

UPDATE: The waitress who posted the receipt online has since been fired by her employer.