The Bishop of Liverpool The Right Reverend James Jones is to retire on his 65th birthday, in August.

A good man who won the trust and respect of people of all traditions in the Church. In many ways it is a great shame that it was traditionally the turn of a liberal when Rowan Williams was promoted to Archbishop of Canterbury. If it had been an evangelical's turn we could well have ended up with Bishop Jones leading us and, strange as it may sound, we would, most likely, be worshipping now in a modern, relevant church which was equally concerned with both evangelism and social justice and where "listening and possibly changing your mind about something" was seen as a mark of strength not weakness.

Bishop Jones is a person with well above average discernment. In a way it is a shame that he is also a quiet, polite man without malice, because if he wasn't he may have warned us of what is to come before it became too late. However, perhaps he will become the anticarey - an evangelical bishop who speaks out bravely and loudly following retirement but without any attachment to the Thatcherite/Torygraph reactionary agenda. 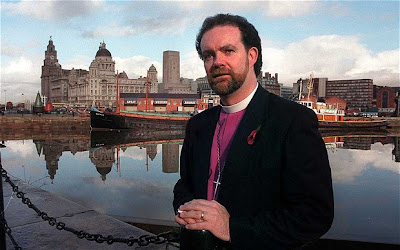 On Facebook, a friend of mine, no doubt disgusted at my out of character hagiography of Bishop Jones, wrote, "He's as much a player of people games as any of them."