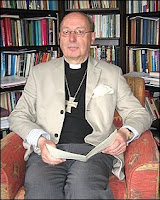 Christopher Hill, the current bishop of Guildford, who in July 2009, "courted controversy over interference in another church's affairs by admonishing the Church of Sweden on their decision to approve same-sex marriage, sending a strongly worded letter to the head of the Church of Sweden, Archbishop Anders Wejryd, warning of "immediate and negative ecumenical consequences" owing to the decision," (Wikipedia) is taking his "right to bash gays" fixation to the House of Lords.

We are seeing an increasing erosion of religious freedom," he writes ahead of his debate in the House of Lords. "I am to ask Her Majesty’s Government a question in relation to the promotion of freedom of religion and conscience internationally, as a fundamental human right and a source of stability. Sadly there is a greater erosion of freedom of religion at this time than for many years before. However, I shall open the debate by stressing that it is about conscience as well as religion. In other words, I am not only concerned about the freedom for the various faith communities but also all conscientious persons." (EPOLITIX)

Of course, the bishop has no interest whatsoever in the conscience or religious beliefs of anybody except those who agree with his own reactionary faction within the Christian Church. Or, maybe I am misrepresenting him big time. Perhaps he will be insisting that Church of England vicars can once again join the National Front and that the Satanists of Guildford will be more than welcome to borrow his cathedral for their black masses from now on.

There is nothing less edifying than a Church of England bishop talking crap. Considering most of them went to the "best" universities I think we should expect a higher level of public discourse from them than this disingenuous, self interested, tub thumping. If the idea of two men touching each other's sensitive bits turns Christopher Hill's stomach then he should just say so instead of spouting out a load of tosh about religious freedom.

It is impossible to have complete religious freedom in a world that is inhabited by more than one human being. One person's freedom is always going to be another person's chains of oppression. Furthermore, there is a huge difference between thought and action. Believing heretics will burn in hell is one thing. Tying heretics onto a stake and setting fire to them is another. Believing gay people shouldn't be allowed to adopt children is one thing. Ordering adoption agencies under your authority to refuse to allow gay couple to adopt children is another. Belief should not be subject to secular legislation. Actions that effect other members of society must always be subject to secular legislation. If you don't believe this to be the case, as the Bishop Guildford appears not to, then you have to agree that it is perfectly fine for hard core neo-pagans to gather in a forest clearing at dawn to rip out the heart of one of the neighbouring tribe's children in order to appease the gods.