A man traveling through the streets of Downtown San Diego says he found Jesus etched into the window of a famous Gaslamp hotel. The image appeared in a seemingly steamed-up window of the Hard Rock Hotel, according to Rana Kay, the director of PR at the hotel. On the left side, if the viewer looks close enough, is the profile of a bearded man in the likeness of Jesus Christ. Some have commented, though, that it could also be Jerry Garcia or Frank Zappa. Chuck Rickman, a retired 911 dispatcher, first noticed the picture as he was walking through Downtown San Diego. Rickman said he usually takes a six mile walk every day, but this one was unusual. When he saw the image, he took a picture and showed it to his friends. They all agreed with him that it looked like Jesus. 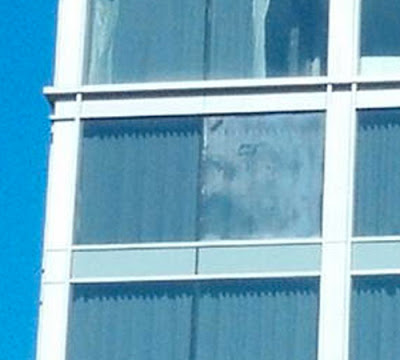 Sir, we want to see Jesus but, to be honest,
we can't even see Jerry Garcia.