Archbishop Georg Ganswein, Pope Benedict's private secretary, who has been dubbed "Gorgeous George" by the Italian media, is now a real-life cover boy. The prelate has landed on the cover of Vanity Fair. The cover on the Italian edition of the magazine shows the 56-year-old archbishop smiling, his blue eyes beaming, above a headline that reads "Father Georg - It's not a sin to be beautiful." The magazine calls Ganswein "The George Clooney of St Peter's" and says it dedicated a cover story to honor his recent promotion to the rank of archbishop and as recognition of his growing power in the Roman Catholic Church. 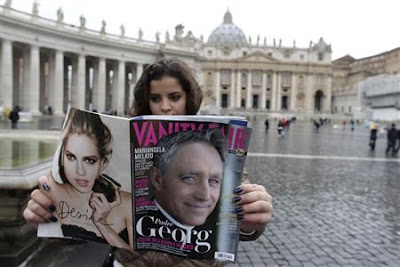 Meanwhile, back in the original Vanity Fair...

Former Archbishop of Canterbury Rowan Williams has joined the House of Lords as a life peer with a title inspired by a village where he grew up. He was officially introduced to the chamber as Baron Williams of Oystermouth on Tuesday.

The Oxford University Press has announced that it will be including the word "oystermouth" in the next edition of its world famous dictionary alongside the definition: "A person who says one thing before getting the job and the exact opposite afterwards. 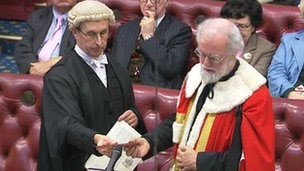