Following the rulings, Prime Minister David Cameron said he was "delighted" that the "principle of wearing religious symbols at work has been upheld", adding that people "shouldn't suffer discrimination due to religious beliefs."

Communities Secretary, Eric Pickles, told the BBC that the government will seek to change the law if necessary in order that Christians in the workplace are not treated differently to adherents of other religions.

Although it is not trendy to agree with such reactionaries as Bishop George Carey and the Archbishop of York, I actually do agree with them that Christianity is being systematically marginalised in my country. I believe there has been an ad hoc campaign waged against Christianity by militant atheists who have sought to wipe as many expressions of it as possible from the public sphere. They have cynically used invented offence against people of other faiths (who, in reality, fully support Christians advertising their religion as they want to be allowed to do so openly themselves) in order to embarrass Christians into silence. Those in authority who are easily scared into being "politically correct"  have been successfully co-opted into this campaign and have have acted with draconian ferocity to enforce the new order's new order on those Christians within their spheres of influence.

It is a shame that the fight back against this oppression has been mostly by fundamentalist evangelicals as this plays into the hands of the trendy elite who want to Dawkinise the UK. It's about time that politically left wing Christians started insisting on a level playing field when it comes to the individual's right to express their ownership of their Christian faith in public. 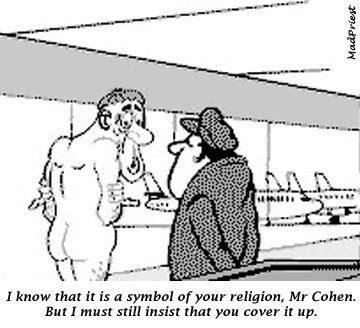