The Rev Steve Chalke, a Baptist minister who founded the evangelical, Christian charity Oasis, says he has become increasingly aware of the suffering of homosexual people within the church and has called on the church to re-examine its attitude towards homosexuals, saying negative attitudes can have a negative impact on people's mental and physical health. He has now called for further debate on same-sex relationships, and has launched an ONLINE SUPPORT SERVICE to offer help to gay people who have been hurt by practices and teachings of some parts of the church.

In an article for "Christianity Magazine," Chalke uses examples of his own ministry to illustrate how he has become increasingly aware of the suffering of homosexual people within the church, but also puts it down to his growing understanding of the Christian Bible. He questions why so many Christians are prepared to dismiss biblical suppression of women in leadership, or the scriptural endorsements of the slave trade as "cultural", but not of negative references to homosexuality. 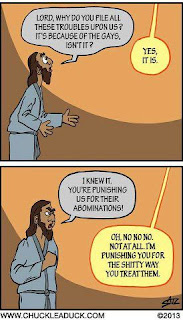 He said: "It is my duty to ensure that everyone - gay or straight - knows that I believe God is for them. This commitment to inclusion is not just necessary in order to play a role in today's society; it is, in my view, the most biblical way of mirroring the life of Jesus Christ."

Of course, the Reverend Chalke is now being accused of being a liberal, even by those who are themselves often accused of being liberal or who call themselves liberal. However, we are in danger of using the corrupted language promoted by partisans to insult the other when we ask ourselves if Steve Chalke is a liberal? Just because he no longer aligns himself with fundamentalism doesn't mean he is not an orthodox, Bible-believing, bog-standard Christian. In fact, his obvious understanding of the core teachings of Jesus Christ show that he must spend more time studying the Gospels and accepting them literally than those who get all their Biblical knowledge from the party line.

I must say that it's great to see the Inclusive Church ethos spreading out of liberal catholic circles into the wider church. If this continues inclusivity will be truly inclusive.