In a press release that has completely taken the British media unawares, the House of Bishops has stated that being trendy will no longer be a bar to being promoted to the episcopate and enjoying the better pension package and generous expenses that go with it.

Jonathan Meyrick, the Bishop of Lynn, plans to release a CD, with tracks including Satisfaction by the Rolling Stones, Wild Thing by the Troggs, and Nights In White Satin by the Moody Blues, later this year. He said he was not aiming for stardom but hopes the collection of 1960s hits will raise funds for Tapping House Hospice and a campaign to restore St Nicholas Chapel in King's Lynn to its former glory.

He said: "I have always been involved in performance on an amateur basis. I have a broad taste in music and in the past my singing has ranged from light opera to Gilbert and Sullivan and music from the 60s. I have done a lot of work with choral societies but I can tailor my voice to fit the era."

The bishop previously appeared on ITV's Stars In Their Eyes dressed as Reg Presley and singing Wild Thing.

My heart sunk as soon as I read the words, "Gilbert and Sullivan" and "rock" in the same press release. I have nothing against bishops singing operetta and I have nothing against bishops singing rock 'n' roll. But a bishop who sings Gilbert and Sullivan and rock 'n' roll is a musical mutation that only ever occurs among the ranks of trendy, Anglican clerics and should be discouraged at all costs. Honestly people, the sooner the House of Bishops is made up entirely of raging queers the better. I can't see gay bishops displaying such awful lapses in good taste. 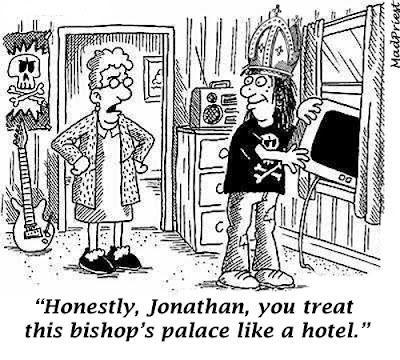