According to Pastor Raymond Bell from the Cowboy Church of Virginia, a gay person can be cured from their same sex attractions just by stroking a horse. Bell sees homosexuality as a type of addiction and believes that the horses in his church, a cowboy ranch in Roanoke, can stop men from being gay by encouraging them to be more masculine. Using what he calls “Equine Assisted Psychotherapy”, Bell holds sessions where men basically stroke their horses. The Pastor said that it is not a new treatment, as it is being used to treat people having communication problems and mental health issues. However, it is the first time that the technique has been used to prevent men from becoming gay. Bell said that the therapy will work and will make men more sturdy and masculine.
I think a lot of gay men will be encouraging their partners to pop along to this church for some horsey therapy. The thought of getting them back more "sturdy and masculine" than before will surely appeal big time. 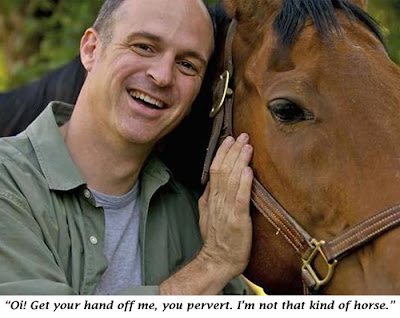