From THE COLORADO SPRINGS BUSINESS JOURNAL:

Honor Hands, a Christian organization, is working on a project of biblical proportions. It is finalizing a Southern Colorado land purchase on which it will build a replica of Noah's Ark according to measurements and directives in the Bible. Plans include a taxidermy museum accessible to the blind so they could touch and feel the animals. There would also be an amphitheater and office space for other Christian outreach organizations, a science center and restaurant (where visitors will be able to eat some of the species of animals that would have been Noah on his boat. They also plan to eventually build a water park on the site.

A Christian woman from out of state has already pledged $23 million as an initial investment.

Honor Hands' Jerry Vinnola said he plans to stick to the blueprints as much as possible, though the boat won’t be built to float.

“For longevity-sake, we won’t use gofer wood,” he said. "But there is a concrete compound designed to look like wood that he said should achieve the right look."

“We want to make a difference in the world with this project,” Vinnola said. “And we believe people will come from all over the world to see it. That means it will be a boon for nearby businesses and will likely create hundreds of jobs."

“I don’t want to say God chose me like he did Noah because this is not about me at all,” Vinnola said. “But God does keep giving me these ideas and I wonder – why me.” 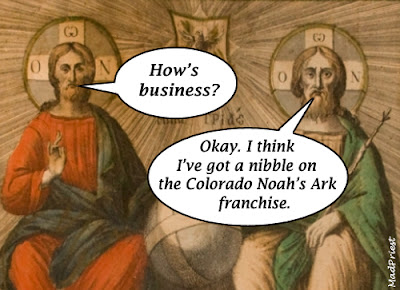