Life is full of disappointments and the failure of the world to end today is just another one to add to the  list. It does, of course, mean that we are all going to have to get through the whole damn Christmas thing now. I'm annoyed at this but I expect there are literally billions of women throughout the world who are really pissed that they are not going to be rescued from a week of cooking and washing up by a fortuitous Armageddon incident. But the shop owners should be pleased. Everyone who had sensibly put off the buying of presents this year as they didn't want to waste their money will be rushing to the malls in the next three days in a mad bid to buy the Christmas they were hoping wasn't going to happen this year.

The Phantom Time Hypothesis is a conspiracy theory developed by Heribert Illig (born 1947 in Vohenstrauß, Germany) in 1991. It proposes that periods of history, specifically that of Europe during the Early Middle Ages (AD 614–911), did not exist, and that there has been a systematic effort to cover up that fact. Illig believed that this was achieved through the alteration, misrepresentation and forgery of documentary and physical evidence.

The bases of Illig's hypothesis include:

1) The scarcity of archaeological evidence that can be reliably dated to the period AD 614–911, on perceived inadequacies of radiometric and dendrochronological methods of dating this period, and on the over-reliance of medieval historians on written sources.

2) The presence of Romanesque architecture in tenth-century Western Europe. This is taken as evidence that less than half a millennium could have passed since the fall of the Roman Empire, and concludes that the entire Carolingian period, including the person of Charlemagne, is a forgery by medieval chroniclers, more precisely a conspiracy instigated by Otto III and Gerbert d'Aurillac.

3) The relation between the Julian calendar, Gregorian calendar and the underlying astronomical solar or tropical year. The Julian calendar, introduced by Julius Caesar, was long known to introduce a discrepancy from the tropical year of around one day, for each century that the calendar was in use. By the time the Gregorian calendar was introduced in AD 1582, Illig alleges that the old Julian calendar "should" have produced a discrepancy of thirteen days between it and the real (or tropical) calendar. Instead, the astronomers and mathematicians working for Pope Gregory had found that the civil calendar needed to be adjusted by only ten days. From this, Illig concludes that the AD era had counted roughly three centuries which never existed.

Of course, this also explains why Harold Camping ended up with egg on his face. He wasn't wrong, after all. He was just a little bit early in his prediction of doom for no fault of his own.

Unfortunately most people are not as sensible as me and did not bother to check all the conspiracy theories out there before getting all worked up about the dolphins thanking us for all the fish and leaving for outer space today. Typical of such easily panicked individuals is Dutch, fundamentalist Christian, Pieter Frank van der Meer.

A Dutch Christian has painstakingly prepared a lifeboat in his garden capable of saving 50 people ahead of biblical floods he expects to accompany Friday's Mayan-foretold 'doomsday.' A fervent Christian, Van der Meer bought the orange totally enclosed lifeboat for 13,000 euros (around 17,000 dollars) and has installed a toilet, a sink, a child's car seat and food supplies. 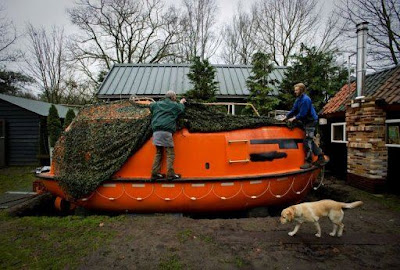 "The Mayans weren't crazy, and if you also look at biblical prophecies, the mountains will melt like wax," Pieter Frank van der Meer told the left-wing Volkskrant daily on Thursday.

He said that the alignment of the Solar System's planets on December 21 will generate and release huge amounts of cosmic energy.

"This will activate the sun," he said. "It's difficult to say what exactly will happen with the sun, but you can expect an enormous solar flare," which could cause a tsunami or a second Flood. Alternatively, there may be a huge earthquake.

"The end of the world is serious," Van der Meer's wife told the Algemeen Dagblad newspaper.

"But what comes afterwards is magnificent."

That would be Saturday then.