Most philosophers I've met are not very funny and most comedians are really shit philosophers. Ricky Gervais is not an exception to this rule. In fact, he rather sets the gold standard for comedians who should stick to the day job. In a recent interview published by the "New Statesman" magazine he shouts loudly about how wonderful and infallible science is and how it's current pronouncements will last unchanged for all eternity, as only a person absolutely petrified by uncertainty can do, and then completely contradicts himself by claiming that it is dogmatism that is the enemy of humankind. Of course, he's right about dogmatism, but surely it applies to dogmatic science as much as dogmatic religion. Gervais' belief in the certainty of current evolutionary theory, for example, is as naive as that of an Islamic suicide bomber's belief in the sex he's he's going to get after he has blown himself on the number whatever bus. Personally I've experienced scientists changing their minds about stuff, and big stuff too, so many times in my life, that I prefer to remain openminded about all things, not just openminded about whatever it's trendy to be openminded about, which in British comedian circles tends to be whatever Stephen Fry is (t)wittering on about at any particular moment in time.

You're probably wondering what the headline to this rant is about. Well here you go...

From THE NEW STATESMAN:

This is very important – there is a difference between people who happen to believe in God, for whatever reason, and the very small minority of crazy, mental, psychotic people who use their religion as a conduit for hate.

There is a difference between people who think, “I’m going to go to heaven and see my relatives” and people who say, “If my son is born homosexual, I’m going to murder him.” There is a chasm. Fundamentalists have no more in common with the average Christian, Muslim or Jew than atheists do.

Well, at least there's something me an 'im can agree on. 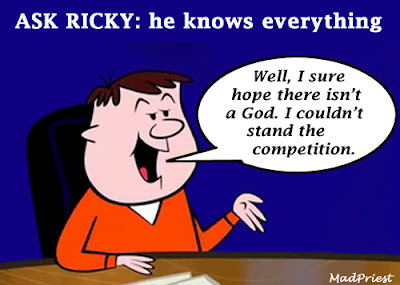