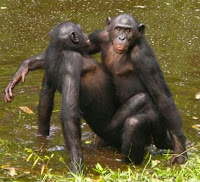 Which is pretty much exactly the way those clever little bonobos deal with confrontation. The pope is not a bonobo, which is a good thing as it means I don't have to conjure up a thought in my head that would most likely lead to a projectile vomiting incident. The pope believes that sex between two consenting adults, who love each other and want to stay with each till death do them part, actually leads to war. Well, there was the case of King Arthur having to go into battle against Sir Lancelot because the randy Frenchman was screwing his missus but that may not have really happened. So, it appears that the pope is talking out of his backside again and is most definitely contributing far more hatred into human society's communal pot than any number of blokes shacking up together. He should get a room, as my friends in America put it.

Pope Benedict XVI came under fire from gay-rights campaigners on Friday for suggesting that attempts to give gay unions the same status as marriages between men and women pose a threat to justice and peace.

"There is also a need to acknowledge and promote the natural structure of marriage as the union of a man and a woman in the face of attempts to make it juridically equivalent to radically different types of union," the pope said in his message for World Day of Peace 2013, which was presented by the Holy See on Friday.

He continued, "Such attempts actually harm and help to destabilize marriage, obscuring its specific nature and its indispensable role in society. These principles are not truths of faith, nor are they simply a corollary of the right to religious freedom. They are inscribed in human nature itself, accessible to reason and thus common to all humanity. The Church's efforts to promote them are not therefore confessional in character, but addressed to all people, whatever their religious affiliation. Efforts of this kind are all the more necessary the more these principles are denied or misunderstood, since this constitutes an offence against the truth of the human person, with serious harm to justice and peace."

Anna Paola Concia, an Italian, lesbian MP with the main centre-left Democratic Party immediately made the pope look like a complete idiot by asking, "What are the battles that have most undermined peace in the history of the world? Are they the religious wars or the claims of the lesbian, gay, bisexual, and transgender movement, who are only asking to see love between two people of the same sex to be recognised."

Now I don't personally believe that there is any point in appealing to natural law in any moral argument because everything that happens in nature is, by its very nature, natural. But, if I was to accept the pope's premise that some things are natural and some are not then I would have to come to the conclusion very quickly that the Christians faith is predominantly about getting people to go against nature. You see, rape, murder and stealing, bullying, child abuse and leaving the old and sick to die from starvation, these are all natural. Altruism, caring for the weak, campaigning against the powerful who bully and abuse, these are unnatural ideas and, very much, the stuff of Christ's teaching.

The massacre of the children in Connecticut was very much a natural thing. The sort of thing that happens in nature all the while. To respond to this tragedy by campaigning for the elimination of guns from private ownership in the United States would be an unnatural thing to do as it goes against the natural law that gives priority to the strongest.

What would Jesus do?

What would the pope do?

Would they both do the same?

In respect of the Connecticut shootings, probably yes. But, unlike the pope, Jesus would be consistant. Jesus places faith, hope and love above all other laws, natural or man-made. So he would be supportive of same gender marriage just as much as he would be supportive of the eradication of guns and other weapons from human society, and for the same reason. Namely that God is love and anything that is of love is of God. If such love appears to be unnatural then that is of no account as nature is subject to the God who created it and God has also given human beings dominion over nature. We are not slaves to nature. We are, as Roxy Music put it, slaves to love.

The pope's message for World Day of Peace 2013, which takes place January 1, is entitled Blessed are the Peacemakers. 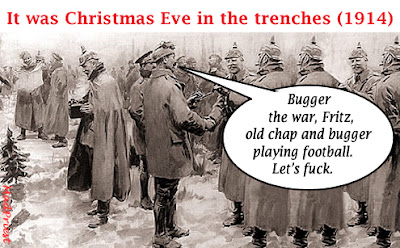