Eleven sisters from the historic Anglican Community of St Mary the Virgin (CSMV) in Wantage, Oxfordshire, are to be received into the the Roman Catholic Church in January 2013. The group, including the Superior of the community, Mother Winsome CSMV, will be joining the poaching pope's Personal Ordinariate of Our Lady of Walsingham.

One sister, who was ordained in the Church of England and is now to be received as a Roman Catholic, said: “The call to Christian unity must always be the primary motivating factor in the decision of Anglicans to enter the Catholic Church. Anything which impedes that process cannot be of God, and so must be set aside to achieve this aim, which is the will of Christ”.

This is incredibly bad news. It's like the beefeaters at the Tower of London deciding to leave for Paris to guard the Eifel Tower. Saint Harriet Monsell and all true Anglo-Catholics have been betrayed by these silly women. 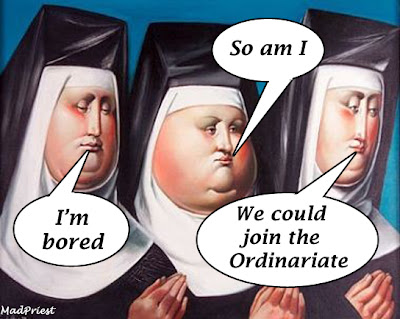