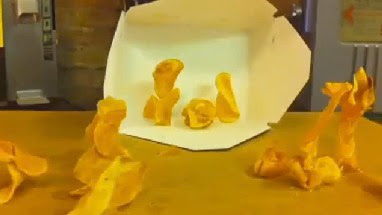 Rocco Gailloreto, an Illinois market owner, claims a potato chip resembling the baby Jesus, from a homemade batch of chips he created himself, led him to build an entire nativity scene from chips.

"Suddenly, there was this little tiny chip that had a little potato skin on it that looked like swaddling clothes, and suddenly I said, 'Oh!' And it just kind of came to me. Baby Jesus," Gailloreto said.

The baby Jesus chip formed the centerpiece of a nativity scene he made entirely from his homemade potato chips.

"I don't see it as something divine. It's more abstract art, if you will," said Gailloreto.

The Illinois branch of American Atheists have already lodged a complaint with the Supreme Court of the United States concerning the erection of the nativity scene which, they claim, may end up being purchased along with a burger and eaten by some innocent, impressionable young person whilst sitting on a bench in a park or other public space.

Their spokesperson, Anthony Nalgitt, told OCICBW... that the building of nativity scenes out of potatoes was contrary to the American Constitution, broke every international treaty brokered by the United Nations during the last fifty years, would destroy the planet and contained four times as many calories than are recommended by the Surgeon General for daily consumption. He also told us that his organisation was going to retaliate by creating a twenty foot tall statue of Friedrich Wilhelm Nietzsche made entirely of turnips.

"That'll kill God once and for all," Nalgitt told our reporter.