Martin Wilson, 26, was killed alongside his friend James Morgan, 20, after the car they were in lost control and ploughed into a garden on November 18. Hundreds of family and friends attended Martin's funeral last week but were left speechless when humanist, Donna Lear, who led the service, outlined his catalogue of crimes. In a 30 minute eulogy she told the congregation how Martin left a 'trail of destruction in his wake and more than a few bloodied noses.'She also told the congregation how Martin, nicknamed 'Wils' by pals, had his 'fifteen minutes of fame' when he was caught on TV sprinting onto a football pitch and punching the goalkeeper.

Speaking at the funeral at Carmountside Crematorium in Stoke-on-Trent, Staffordshire, she told mourners how prison had become 'his second home.'

She said: 'His escapades often landed him in prison - but that was okay because Wils wasn't a big fan of going to work anyway.'

I've done similar. I once had to conduct the funeral of an alcoholic wife beater. His wife had told me that she was glad he was dead. I told the congregation that the dead man hadn't believed in God and didn't care one jot about his abysmal behaviour, so I wasn't going to hypocritically go on about God and heaven or give an eulogy about how wonderful he was. The only complaints I received afterwards were from Roman Catholic members of his family. But, then, Roman Catholics have a tradition of saying good things about monsters at funerals especially if their local church has benefited from their crimes over the years. 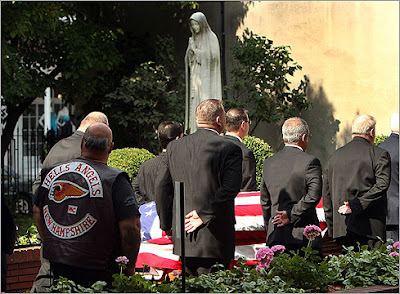