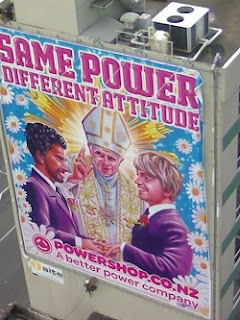 Electricity company Powershop says a billboard depicting Pope Benedict XVI marrying a male couple is not targeted at Catholics. The four-and-a-half storey billboard is part of a campaign by Powershop, with the slogan "Same Power, Different Attitude."

Powershop chief executive Ari Sargent said the billboard was not targeted at Catholics "per se", but the Pope was an analogy of big power companies.

"It's making the point that some larger institutions can often lose touch with their constituents."

It was never their intention to offend anyone, he said.

Powershop is a state owned company.