Pope Benedict on Friday promoted his German priest-secretary to a job that significantly increases his influence and power in the Vatican. Monsignor Georg Ganswein, who has been the closest person to Benedict since his election in 2005, will be elevated to the rank of archbishop in the new job, whose official title is Prefect of the Pontifical Household. As prefect, Ganswein, 56, already one of the most recognizable and powerful figures in the papal court, will arrange all the pope's private and public audiences and his daily schedule. But because he is expected to keep his job as chief private secretary, he will have even more power in deciding who gets to see the German pope, who is now 85 and looking frailer. Ganswein is expected to keep the new job for the remainder of the papacy.

The Pope has told Georg that if he behaves himself and is good at his new job he will allow him put an "e" on the end of his name. 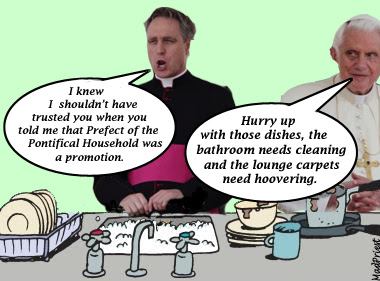