The government of the United Kingdom has just announced details of its proposed legislation concerning marriage between two people of the same gender. The surprising and horrible news is that the Church of England and the Church in Wales will be completely banned from conducting same gender weddings even if they decide they want to. The government will also be changing existing equality legislation to make sure that religious groups cannot be taken to court for not allowing same gender marriages and individual ministers of religion will not be able to marry same gender couples unless the organisation they belong to agrees, as a whole, to conduct such marriages.

Basically, it is probably the biggest cock-up the Conservative Party has ever put before Parliament. It's a complete shambles with so many inconsistencies that lawyers, from both the for and against camps, will have a well-paid field day knocking holes in it.

There is going to be a battle over this. The good guys may well be firing their first salvo this evening. I will keep you informed. 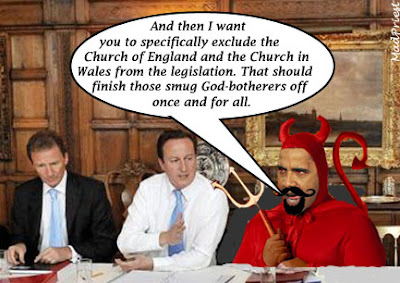