Cardinal George Pell of Sydney is digging a bigger and bigger hole to bury the Australian Roman Catholic Church in as he continues to defend the indefensible.

Australian Prime Minister, Julia Gillard, announced Nov. 12 that a national royal commission would investigate institutional responses to allegations of child sexual abuse in Australia. Cardinal George Pell of Sydney provoked a furious backlash when he suggested pressure for the royal commission had been provoked by a one-sided media "smear" campaign against the Catholic church. He said abuse by Catholic clergy had been singled out and exaggerated, but he welcomed the royal commission as "an opportunity to clear the air, to separate fact from fiction."

Pell's ambivalence about the commission earned him criticism from other corners of Catholic Australia. Retired Sydney Auxiliary Bishop Geoffrey Robinson, a former head of the church's national professional standards committee and himself a victim of child sexual abuse, described Pell as "an embarrassment to me and a lot of good Catholic people," and said that his response to the royal commission had been "a disaster for the Catholic church."

"He's not a team player, he never has been," Robinson said. "He's not consulting with anyone else, he's simply doing his own thing. I personally believe he's doing it very badly indeed and I think the other Australian bishops, as one of the very first questions they need to face, they've got to confront him and determine who it is that speaks in their name and who doesn't."

Opposition leader Tony Abbott, Australia's most prominent lay Catholic and a close associate of Pell's, also distanced himself from the cardinal's remarks.

More embarrassing for Pell has been the response of leading child protection expert Patrick Parkinson of the University of Sydney. The bishops hired Parkinson to provide an independent assessment of its national sexual abuse protocol, "Towards Healing," which was introduced in 1996 and has since been twice revised. At his press conference, Pell invoked Parkinson's endorsement of "Towards Healing" as confirmation that the church had cleaned up its act and that any inadequacies in dealing with abuse allegations were all in the past. However, the next day, Parkinson announced that he had withdrawn his endorsement of "Towards Healing" because the church was still failing to act against clergy who didn't comply. 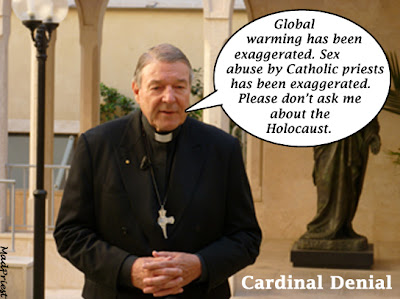