Lennon Cihak, a high school junior in the Minnesota town of Barnesville, was raised Roman Catholic like his parents and grandparents. His mother and father, Shana and Doug Cihak, were baptized, confirmed and married in Barnesville's century-old Assumption Church, the same one where Lennon had been attending confirmation classes since spring.

Then on Oct. 24 — 13 days before the vote on a proposed state constitutional amendment defining marriage as between one man and one woman — everything changed. For weeks Lennon had been thinking about the marriage amendment. A lot of his friends were opposed, saying it didn't seem fair.

"In the Constitution it says all men are created equal. If they can't get married, they aren't equal," he remembers thinking.

So that night he took a pro-amendment yard sign, changed "Vote Yes" to "Vote No" with a black marker and scrawled the words "Equal Marriage Rights." He then posed with the sign, snapped a photo with his phone, and posted the picture on his Facebook page.

Shana Cihak, a City Hall billing clerk, says the next day there was an urgent message on the family answering machine for her and her husband to meet with Father Gary LaMoine, the parish priest. LaMoine told her that Lennon's opinions on same-sex marriage were in conflict with the church and that her son could not be confirmed.

"Do you mean to tell me," Shana Cihak says she told LaMoine, "that when you stand up there on Sunday and you see all of those families with two or three kids, you don't know they are using birth control?"

She then told she could no longer serve as sponsor of one of the kids in the confirmation class. She came home in tears.

In a strongly worded letter LaMoine sent to church members on Nov. 15, the priest tells a very different story. He called Lennon's Facebook picture — which was "liked" by several members of the confirmation class — a "defacement" and apologized to the parish for the Cihaks' behavior. He also said Lennon was the one who decided to end the confirmation process. LaMoine wrote that he never denied Lennon's confirmation, but added: "Even if he had not withdrawn … I would have had no choice but to remove him from consideration given his rejection of marriage as we understand it. Rejection of the church's teaching on marriage is a very serious breach of faith."

Lately Lennon's father, Doug, has been rethinking once-steadfast beliefs. "Before, I was always one man, one woman. I am a conservative," he says.

But at the polling place, he paused when it came to voting on the Marriage for Minnesota Act.

For listening to the arguments for and against and then making their own minds up even though it resulted in their ostracism from a petulant and spiteful church, Doug, Shana and Lennon are hereby declared to be OCICBW...'s

Shana gets a special commendation for not backing down to a bully. 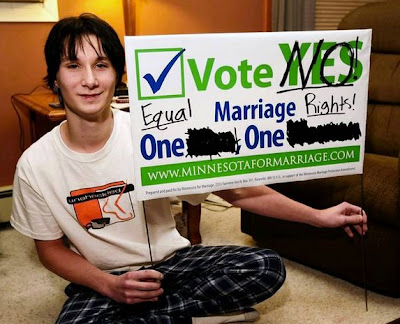