From THE MILWAUKEE WISCONSIN JOURNAL SENTINEL: 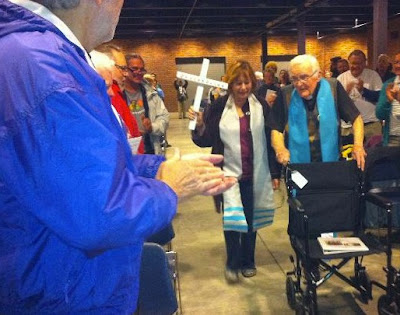 A 92-year-old Milwaukee Jesuit is the latest American priest to be sanctioned for celebrating the Catholic Mass with a woman priest in violation of church teaching. Father Bill Brennan, a longtime peace activist, has been ordered not to celebrate the Eucharist or other sacraments publicly, or to present himself publicly as a priest by the Archdiocese of Milwaukee and his religious order, the Society of Jesus. It comes three weeks after Brennan celebrated Mass with Milwaukee native the Rev. Janice Sevre-Duszynska during an annual protest at what was historically known as the School of the Americas at Fort Benning near Columbus, Ga. Brennan said he knew he risked censure when he celebrated the sacrament with a woman priest.

"Sometimes in our lives we have to trust our conscience and bring about the consequences. I wasn't trying to show off for the ladies," he said.

Brennan added that his decision to celebrate Mass with Sevre-Duszynska grew not out of some "wild-eyed liberal" protest or heady theological research, but from his deep admiration for his own mother. He recalled as a child of 9 hearing his older brother tease her, suggesting that "for a woman she was pretty intelligent."

"I'll never forget the look on my mother's face," said Brennan. "She knew we were teasing, but it wasn't funny. We never did that again."

Elsewhere, I notice that "The National Catholic Reporter" (probably the best religious periodical in the world) has launched a campaign arguing for the ordination of women to the priesthood in the Roman Catholic Church. The reactionary control freaks of the Vatican hierarchy have made a serious tactical mistake. One often made by those so drunk with power they can't think straight. The thing is the more you try to force people the more likely they are to kick back. By trying to force the clock back, Benedict seems to have just made the clock run forward faster. The times could be changing. My guess is that by 2050 there will not be much left of the Christian church but it will be a really good church where all are equal before God. That will be because of the work of veteran campaigners for freedom, justice and peace like Father Bill. Good on him!